Skip to menu Skip to content
Office of Commercialization > Opportunity Announcement
Washington State University (WSU) is offering an opportunity (AOO) to interested parties to submit proposals for an exclusive license for the red raspberry cultivar, WSU 2166, known as the varietal denomination “Cascade Premier”.

‘Cascade Premier’ is primarily characterized by suitability for machine harvestability, tolerance to root rot, early season production and large, conical fruit that is longer than it is broad.

The variety is available for exclusive licensing from WSU for worldwide commercialization rights, excluding North America.  This AOO is to identify a licensee whose proposal is determined to be the most responsive to the AOO and who appears to have the best resources and business plan for commercializing the variety in the stated territory.

If your organization is interested in obtaining the exclusive license to commercialize Cascade Premier, a proposal addressing the “Responsiveness to AOO” questions must be received by the email address indicated below no later than July 1, 2020.

Currently, WSU is the owner to the US Plant Patent 30,980.  The full description of the patent can be found at here.

The rights to grow, sell, propagate, and distribute Cascade Premier in the geographic regions of United States and Canada are exclusively licensed to a US company in Lynden Washington.  It is contemplated the selected Respondent will obtain clean plant material from this US company having said Plant Patent rights.

You may respond by e-mail of your proposal to the following address below:

If you have any questions or need additional information regarding this AOO, please contact Albert Tsui at 509-335-3691 or albert.tsui@wsu.edu.

See below for a brief breeder description of Cascade Premier or the hyperlink to  US Plant Patent 30,980 for a more complete detailed description.

At this time, we are primarily looking for proposals for a worldwide exclusive license, excluding geographical rights to North America.

Each proposal must cover all of the following areas and must be written in English.  All monetary quantities expressed in your proposal must be in U.S. dollars:

WSU will evaluate responses based on the above-identified factors as a whole, but will especially evaluate the commercialization plans to grow Cascade Premier in the EU, that the Respondent has a clear proposal and plan to pursue protection of PBRs, and the Respondent’s business plan ensures that Cascade Premier does not enter the North American market.

WSU may request, from any responding party, additional information and/or clarification in regard to submitted proposal.  WSU reserves the right to enter into negotiations subsequent to this AOO which may result in changes to any of the terms initially proposed in the AOO, including without limitation, the territory, exclusivity, royalty rates, etc.  A license will not necessarily be awarded to the party or parties proposing the most favorable financial terms in response to this AOO.

By submitting a response, Respondent understands that WSU is under no obligation to award a contract or license agreement as a result of this solicitation.  Respondents are cautioned to make no assumption of an award or acceptance until they receive written notification to that effect by WSU.  WSU will choose one or more offerors considered to be provisionally accepted.  It is expected that one of the provisionally accepted Respondent will be finalized contingent upon the completion of a successful negotiation between WSU and Respondent.  If negotiation is unsuccessful, WSU may choose another Respondent with which to negotiate.  All expenses that offerors incur in responding to this AOO will be borne by Respondent.  WSU will not reimburse Respondent for any such costs.

This AOO process does not guarantee the award of any license by WSU.  Any responses, materials, correspondence, or documents provided to WSU may be subject to the U.S. Freedom of Information Act or the Washington Public Disclosure Act and may be released to third parties in compliance with those regulations.  If WSU receives a request for information under such regulations, you will be notified to that effect so that you can, if desired, obtain a court order enjoining such disclosure.

The cross for the red raspberry (Rubus idaeus) WSU 2166 was made by Patrick P Moore in 2007 at WSU Puyallup Research and Extension Center. The cross of WSU 1447 x WSU 0697 resulted in 143 seedlings.  Neither parents are patented.

WSU 2166 was planted in plots at the WSU Puyallup Research and Extension Center Goss Farm in 2014 and harvested by hand and data collected for yield, average fruit weight, fruit firmness and total of fruit weight in 2016 and 2017.  Using the yield at each harvest date, the midpoint of harvest could be calculated.  The midpoint of harvest for WSU 2166 was very similar to Willamette.  Willamette is an early ripening cultivar that was released by the U.S. Dept. of Agriculture, Corvallis, OR in 1943.  Although yield of WSU 2166 was low in the 2016 harvest season, the fruit quality was good.  In 2017, the yield increased.

In 2013, fruit samples were collected of machine harvested fruit of WSU 2166 from a 2011 planting at WSU Puyallup.  Soluble solids content, pH and titratable acidity for WSU 2166 were similar to that of Willamette.   Anthocyanin content for WSU 2166 was similar to that of Meeker. Meeker is a late season raspberry cultivar released from Washington State University in 1967.  Meeker has been the most planted raspberry in Washington, Oregon and British Columbia with over 50% of the plant sales in 2017.  The fruit characteristics of WSU 2166 should be suitable for the Pacific Northwest processing industry and could also be used for fresh market.  The flavor of WSU 2166 fruit is tart, but well balanced. The fruit of WSU 2166 is firmer than Cascade Harvest, Meeker, and Willamette.

In 2014, plants of WSU 2166 were planted in an area of the WSU Puyallup Research and Extension Center Goss Farm that was known to be infested with Phytophthora rubi the causal agent for raspberry root rot.  In 2016, the subjective rating of vigor for WSU 2166 was 4.5 out of a possible 5 (15th out of 32 clones), in the 2016 rating there was little difference among the top 20 raspberry clones.  2017 was a much wetter year and there was much more disease pressure.  In 2017, WSU 2166 had a rating of 3.5 out of a possible 5 (6th out of 32 clones), but was rated in the top 20% of the clones.  Although WSU 2166 is susceptible to root rot, it shows relatively good tolerance. 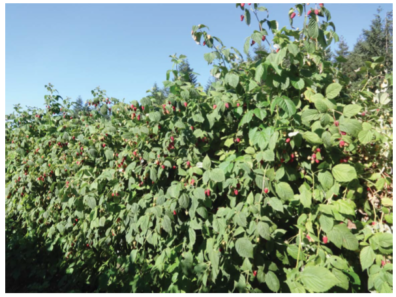 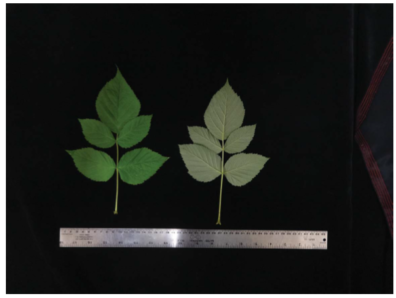 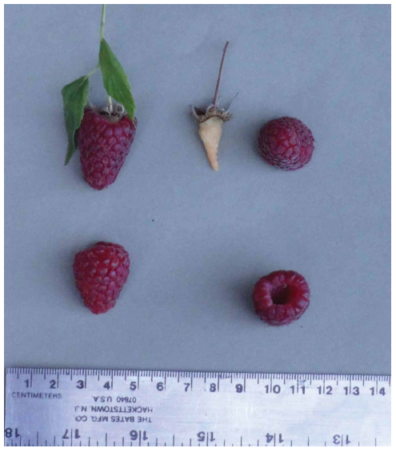 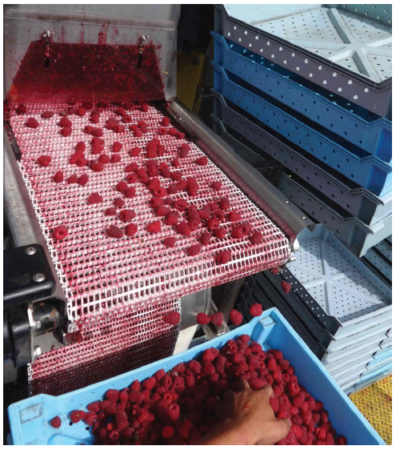 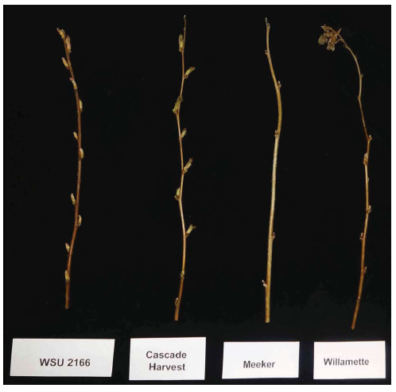 ‘WSU 2166’ has not been observed under all possible environmental conditions and as such the characteristics may vary in detail depending on weather conditions, day length, soil type and location.  The description is based on observations taken in Year 11 (except as noted) at the Washington State University Puyallup Research and Extension Center Goss Farm and with cooperating growers in Lynden, WA.

If you have any questions or need additional information regarding this AOO, please contact Albert Tsui